A Woman's Diet Might Help Her Avoid Breast Cancer

A new study of more 350,000 women found that women with diets incorporating more foods that increase inflammation in the body had a 12% increase in their risk of breast cancer compared to women consuming more anti-inflammatory diets.  (Credit: Carlota Castro-Espin, Catalan Institute of Oncology and Bellvitge Biomedical Research Institute). 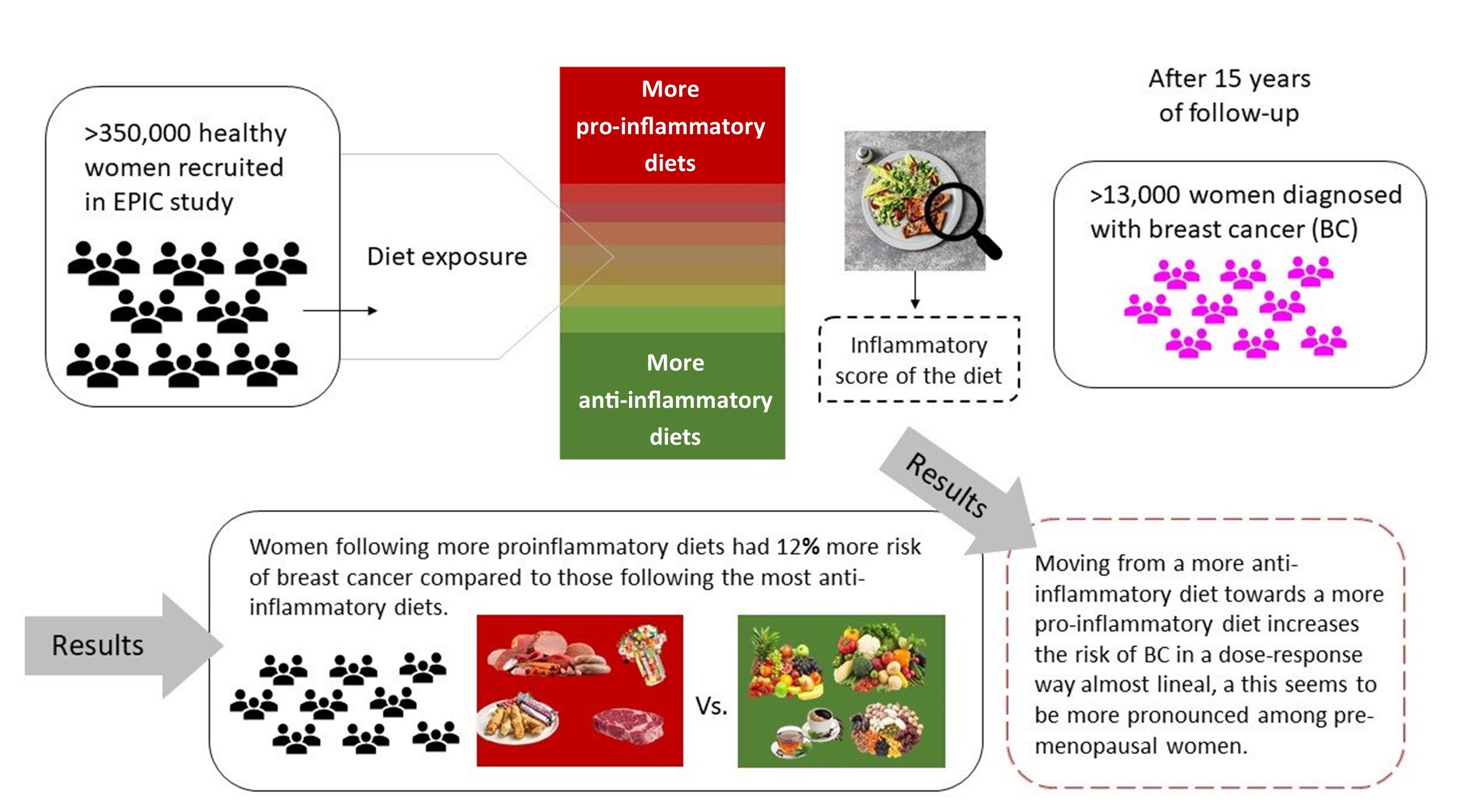 Women whose diets tend to feed inflammation may have a heightened risk of breast cancer, a preliminary study suggests.

The study, of more than 350,000 women, found that the more "pro-inflammatory" foods women consumed, the higher their breast cancer risk.

The term refers to foods thought to contribute to chronic low-grade inflammation throughout the body—a state implicated in various disease processes.

The findings do not prove cause and effect, the researchers said. But they do add to evidence that diet can affect the likelihood of developing breast cancer.

Unsurprisingly, a pro-inflammatory diet is full of the usual suspects.

It's high in red and processed meats, sugar and saturated fats, said Carlota Castro-Espin, the lead researcher on the study.

That type of diet, she said, might contribute to breast cancer because it promotes inflammation, and also because it's lacking in foods that fight inflammation.

Those foods are no surprise, either. They include vegetables, fruits, beans, fiber-rich grains and "good" unsaturated fats.

So the findings square with the general advice on healthy eating, according to Castro-Espin, a PhD student at the Catalan Institute of Oncology, in Barcelona, Spain.

She is scheduled to present the results this week at the annual meeting of the American Society for Nutrition. Studies released at meetings are usually considered preliminary until published in a peer-reviewed journal.

Diet habits have been linked to the risk of numerous cancers, breast cancer among them.

Marjorie McCullough is senior scientific director of epidemiology research at the American Cancer Society. She said, "There is some evidence that dietary patterns rich in plant foods and lower in animal products and refined carbohydrates are associated with a lower risk of postmenopausal breast cancer."

McCullough added that one clinical trial—the type of study considered to give the strongest evidence—found benefits with the traditional Mediterranean diet. Women assigned to the diet (and supplied with olive oil) had a lower risk of developing breast cancer than those who were told to cut fat from their diets.

The Mediterranean diet bears many of the features of an anti-inflammatory one—being rich in fish, vegetables, whole grains and good fats, and low in red meat and processed foods.

The cancer society does not endorse any specific diet for curbing cancer risk. Instead, it advises following a "healthy eating pattern" that includes plenty of plant foods and limits on sugar, refined grains and red meat.

McCullough, who was not involved in the new study, said it reinforces that advice.

Diet, of course, affects body weight, and obesity is believed to boost the risk of various cancers. But, McCullough said, studies suggest that eating habits affect cancer risk above and beyond their impact on weight.

Inflammation may be one avenue, Castro-Espin said.

For the study, she and her colleagues used data from a long-running research project on diet and cancer risk among European adults. They focused on more than 318,000 women who were free of breast cancer at the outset.

The researchers assigned each woman a score rating the "inflammatory potential" of her diet, based on the nutrients and other compounds in the foods she reported eating.

Over about 15 years, more than 13,200 women were diagnosed with breast cancer. That risk was 12% higher among the one-fifth of women with the most inflammatory diets, versus the one-fifth eating the fewest pro-inflammatory foods.

The link was stronger among women who developed the cancer before menopause, rather than after, Castro-Espin said.

Other factors were taken into account, she noted, including body weight, drinking habits and exercise. And the connection between inflammatory diets and breast cancer risk still held.

Castro-Espin agreed that it all supports the existing diet advice.

Along with its guidance on food choices, McCullough said, the cancer society advises limiting alcohol. Drinking is linked to several cancers, including breast tumors.

The group also encourages people to maintain a healthy weight and get regular exercise—at least 150 to 300 minutes of moderate activity, like brisk walking, each week.

Posted in: Nutrition/Diet, Side Effects