What Does It Mean If Breast Cancer Spreads to Your Lymph Nodes?

After you get a breast cancer diagnosis, it likely won’t be long before your doctor starts talking to you about lymph nodes. Lymph node involvement is an important part of staging and treatment with breast cancer.

This article will help explain what it means when breast cancer spreads to the lymph nodes, how it affects cancer staging, and the types of treatment that are typically used.

What are lymph nodes?

Lymph nodes are little bean-shaped structures that contain immune cells that help fight infection. They’re connected by a system of lymph vessels that carry fluid throughout your body. As fluid passes through your lymph nodes, they filter out harmful substances.

Cancer spreads when cancer cells break away from the primary tumor. In breast cancer, these cells are most likely to reach the lymph nodes closest to the affected breast.

Usually, these lymph nodes are under the arm, but there are also clusters of lymph nodes near the collarbone and breastbone. 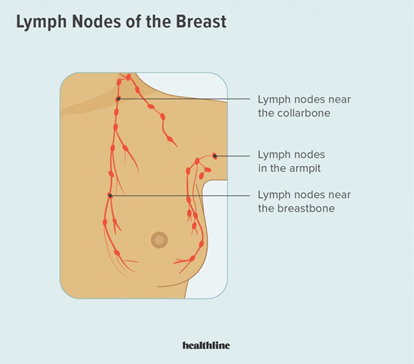 Even if cancer has reached nearby lymph nodes, it doesn’t mean it has spread to other areas. But cancer that reaches the lymph system or bloodstream has a greater potential to travel to other parts of the body.

Breast cancer that has spread to lymph nodes may be treated more aggressively than if it hadn’t reached these nodes.

The 5-year survival rate for breast cancer that hasn’t reached nearby lymph nodes is 99 percent versus 86 percent when it has.

After an initial cancer diagnosis, you’ll need to know if it has spread beyond the primary tumor. If you have enlarged lymph nodes, your doctor may be able to perform a needle biopsy. Otherwise, the lymph nodes can be checked when you have breast surgery.

Your doctor will assign a clinical stage based on:

After surgery, you’ll have more detailed information from the breast tissue and lymph nodes. This information helps provide the pathological stage.

Lymph node involvement is a key factor in staging breast cancer. In the TNM staging system:

Here’s a closer look at what to know about cancer cells and lymph node involvement.

Other things that can influence breast cancer staging include:

All these factors are combined to determine the stage.

Are there symptoms of breast cancer in the lymph nodes?

You probably wouldn’t notice if a few cancer cells reached a lymph node. As the number of cancer cells grows, symptoms can include lumps or swelling in the armpits or around the collarbone.

If you notice enlarged lymph nodes but no other symptoms or signs, schedule an appointment with a doctor.

What are the treatment options?

Breast cancer treatment options are based on a variety of factors, including:

The two main types of surgery for the primary breast tumor are breast-conserving surgery (lumpectomy) or mastectomy.

The goal of radiation therapy is to focus on cancer cells that may still be present in specific areas, like the lymph nodes or tissue that was close to the tumor that was removed.

Radiation therapy can damage the DNA of cancer cells, which helps destroy them. It doesn’t target your entire body like chemotherapy, so there’s a lower risk of harming healthy cells.

There are two types of radiation:

A lymph node dissection is a surgical procedure that involves the removal of lymph nodes near the tumor. A sample of the lymph node tissue is then examined for signs of cancer cells.

This treatment may involve:

Removing a few lymph nodes doesn’t always cause problems and it doesn’t weaken your immune system.

But missing lymph nodes can cause lymph fluid to back up, a condition called lymphedema. The risk of lymphedema increases with the number of lymph nodes removed. Once it develops, this can become a long-term problem.

Other side effects may include numbness and decreased range of motion in the arm and shoulder.

In 2017, results of a large clinical trialTrusted Source showed that axillary lymph nodes (those under your arm) don’t always have to be removed, even when cancer cells are found in sentinel nodes (those closest to the breast). This applies to those with early stage breast cancer who have a lumpectomy.

Chemotherapy drugs can destroy cancer cells throughout your body.

Your doctor may suggest chemotherapy when there’s lymph node involvement or if there’s a chance that cancer has spread beyond the lymph nodes.

Chemotherapy may be a good choice in very aggressive cancers or those that are negative for hormone and HER2 receptors.

Hormone therapies can block estrogen receptors or lower estrogen levels. This may be an effective treatment option for breast cancer that has a hormone receptor status of estrogen-positive (ER+).

This type of therapy is also called endocrine therapy. These medications include:

Other targeted therapies include:

Compared to chemotherapy, targeted therapies tend to do a better job of telling the difference between cancer cells and normal cells. Because of this, these therapies can damage cancer cells, while limiting the harm to normal cells.

Immunotherapy is a type of biologic therapy that helps your immune system recognize and attack cancer cells.

Some examples of immunotherapy for breast cancer include the following drugs that are given as intravenous (IV) infusions:

Clinical trials are available for many types and stages of breast cancer. An oncologist can help determine if there’s a trial that’s a good fit for you. 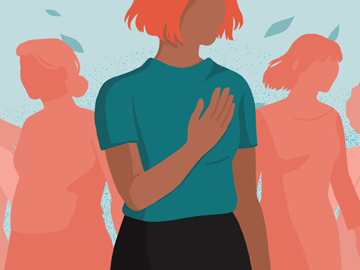 Understanding your cancer and treatment

Not all breast cancers are alike. Someone else’s experience with their treatment may be completely different from yours. Understanding your type and stage can help make sense of your doctor’s recommendations. This may help you feel better about your treatment choices.

A big part of cancer treatment is the relationship between you and your oncology team. Here are some things you’ll want to know about early on so you’re well informed about your specific type of breast cancer:

What to find out from your doctor

Oncologists meet with cancer patients every day and it’s their job to see you as a whole person. Express your wants and needs. Rest assured that no question is too insignificant to ask.

When breast cancer is found in the lymph nodes, it means that cancer has spread from the primary tumor and is at least stage 2.

Lymph node involvement is an important part of staging and in determining which treatments are most likely to be effective.

Knowing the specifics of your breast cancer can help you partner with your doctor and be an active participant in your treatment.