“Smarter screening” and a better understanding of the breast cancers women of color are more likely to develop are all crucial to helping these patients survive this disease at the same rates as their White counterparts. 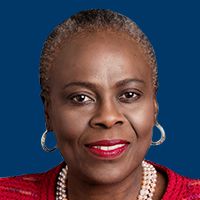 Prior evidence has demonstrated that women of color have poorer outcomes following care for breast cancer. While drugs with improved efficacy will help alleviate that survival disparity, Olufunmilayo I. Olopade, MD, FACP, OON, said “smarter screening” and a better understanding of the breast cancers these patients are more likely to develop, are all crucial to helping Latinas and Black women survive this disease at the same rates as their White counterparts.

“We want to make sure we can provide the right treatment for the right patient at the right time,” explained Olopade. “Then, we can keep our families healthy…what we're looking for in preventive oncology, we can do in the clinic and we can also do it in the population. [We] identify individuals who have already had cancer as a way for us to reach their family members.”

Olopade, American Cancer Society clinical research professor at the University of Chicago’s Center for Clinical Cancer Genetics & Global Health, delivered the Giants of Cancer Care® keynote address during the 5th Annual School of Nursing Oncology virtual conference.1 An oncologist and geneticist, Olopade was recognized as a 2020 Giant of Cancer Care for Prevention/Genetics in recognition of her research demonstrating that women of African descent are significantly more likely to develop breast cancer at relatively young ages and to develop triple-negative breast cancer (TNBC), an aggressive form of the disease that is resistant to hormone-based therapy.

Olopade told her audience that screening has been an effective tool at reducing breast cancer deaths. However, in her research, African American women in and around the Chicago, Illinois area get screened at rates higher than the national average, yet still have poorer outcomes than White women—even though patients achieve pathologic complete responses at similar rates.

“What we learned from Chicago is that Black and Brown women, and in fact, all young women who get breast cancer under the age of 14, are the ones that are having the worst disparity. In all other cancers, older women tend to do worse,” she said. “We suddenly say, ‘Everyone starts screening at 40,’ [but] there are some women who would have had breast cancer that would have the potential to kill them before they ever get that first mammogram.

Olopade has studied patterns of inherited breast cancer women in Nigeria, Cameroon, Uganda, Brazil, and among Black women in the United States. Those data, along with findings from the CARRIERS study which included 32,247 women with breast cancer and 32,544 controls, show that BRCA1/2 and PALB2 are the most important genes for assessing breast cancer risk in this patient population. Black women who harbor these genes develop cancer are almost 15 years younger at diagnosis on average compared with White women who carry the same pathogenic variants.2

“These are women who get breast cancer at a very young age. So that’s why we cannot use a one-size-fits-all [approach], and then say, ‘Oh, but you know, BRCA1 and BRCA2 are not important.’ They are important. It all depends on your population. When you test 1000 cases and 1000 controls in Nigeria and you have almost 12% of them showing up with a mutation in BRCA1, BRCA2, or PALB2, you’re going to focus on that as an intervention for cancer control.”

Determining a patient’s individual risk is challenging, in part because Black women tend to be underrepresented in clinical trials in the United States and abroad. Genomic testing for precision risk assessment will transform cancer care, Olopade said.

This is where investigators need to go beyond race and ethnicity, she said. Physicians can use data from genome-wide association studies (GWAS) to develop a polygenic risk score (PRS), which is calculated for an individual based on the presence or absence of risk variants identified in large GWAS studies. PRS can provide better insight than traditional risk models, especially in these populations. The model can estimate risk for a Black or Brown woman based on the proportion of African ancestry in her DNA.

“We can now identify women who are in the top percentile, [representing] 5% of women who have a risk that is actionable before the age of 50. If we can find those women before the age of 50, or even if we can…can really track them [and] counsel them, and then we can put them on a screening, that is going to be different because they are at risk for [estrogen receptor]-negative breast cancer, [and] I think that will really help the field. We’re talking about deescalating—not just using more and more treatment. We have to deescalate in what we're doing for early detection. We have to use innovations.”

Jason Harris, Senior Editor, OncLive®
Jason Harris has worked in journalism for more than 20 years, including stints at daily newspapers and niche publications for oncology and cardiology. He is a senior editor for OncologyLive® and managing editor for Oncology Fellows and the annual Giants of Cancer Care® album. He also contributes to the OncLive On Air and OncFellows podcasts. Email: jharris@onclive.com