How to Talk to Your Kids About Your Breast Cancer Diagnosis

Share: How to Talk to Your Kids About Your Breast Cancer Diagnosis

Almost three million children and adolescents in the United States have a parent who has or once had cancer, according to the American Academy of Child & Adolescent Psychiatry (AACAP). Among newly diagnosed adults with cancer, one in five has children under 18.

It can be a hard conversation for a parent to have with their child, but it's an important one. “Younger children typically pick up on mood changes in the family while older children are likely to be distressed by overhearing things from family members or friends," explained Paula K. Rauch, M.D., director of the Marjorie E. Korff Parenting At a Challenging Time (PACT) program at Massachusetts General Hospital. "If left in the dark, children feel that their parent doesn’t trust them enough to share important family information about the parent’s medical condition or the silence may convey that the parent’s cancer is too terrible to talk about together. While a parent might think that not talking about the diagnosis or treatment is protective, a child is more likely to feel hurt, confused, and excluded.”

Monisha Parker, 33, the blogger behind Purpose Painted Pink who lives in Clayton, North Carolina, had to have this difficult conversation with her sons Jaylen and Ezra, Jr. after she was diagnosed with breast cancer at age 28. When she told Jaylen, then 9, about her diagnosis, he cried remembering his grandmother’s earlier battle with breast cancer. Parker wanted to break down with him, but she realized that she needed to project to him that everything would be okay. 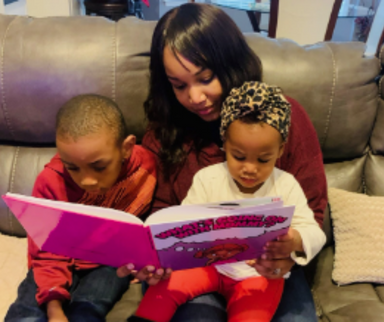 Author Monisha Parker reads her book, "What's Going On With Mommy?" with her two younger children, Ezra and MaKinley Grace.

“I let them come with me to a few doctor’s appointments and they visited briefly during one of my chemo treatments,” says Parker, who also blogs for The Young Survival Coalition. When she began losing her hair during chemo, Jaylen questioned why she needed to wear a wig, telling her she was beautiful just as she was and to ignore what others might say.

Identifying the parent’s medical condition as cancer enables children to ask their questions about what they may be noticing or fearing so they are not left to worry alone, explains Dr. Rauch, co-author of Raising an Emotionally Healthy Child When a Parent is Sick. “Confusion is the enemy of coping," she says. "Naming the cancer and inviting questions helps children engage with parents and supports resilience."

You should feel comfortable talking to children as young as 3 years old about the diagnosis by teaching them the word 'cancer'. "In order to make something able to be part of a conversation, you have to name what it is and name what it is accurately," says Dr. Rauch. "When you use euphemisms such as 'boo-boo', 'lump' or 'sickness,' children will then be left to worry that any lump or bump they get or having the common cold may result in the same symptoms and challenges faced by their parent. Naming it is to differentiate it from an experience the child could have by him or herself. Naming it is helpful.”

Dr. Rauch adds that using the specific name of the cancer helps older children understand that not all cancers are the same, and it's best for them to learn more about their parent's specific cancer from their medical team and not other sources.

Confusion is the enemy of coping. Naming the cancer and inviting questions helps children engage with parents and supports resilience.

Inspired by her kids' questions, Parker wrote a children’s book entitled, What’s Going on with Mommy? to help facilitate this cancer conversation. Yale Cancer Center also has a running list of books and resources dedicated to supporting children and families coping with a cancer diagnosis.

Chelsea Lloyd, a 28-year-old actress and comedian living in Los Angeles, was in elementary school when her mother was first diagnosed with breast cancer. Her mom underwent chemo for “stage 2 to 3” breast cancer within two weeks of her diagnosis, then had a single mastectomy, radiation, and five years of medication before ending up in remission for 17 years. When her mother was initially diagnosed, Lloyd knew her mom had to “take it easy” a lot, she watched as she lost her hair and had to wear wigs, but otherwise, Lloyd did not fully understand her diagnosis. 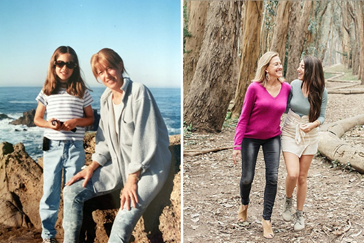 Chelsea Lloyd and her mother around the time of her mother's cancer diagnosis and more recently.

“I think as a kid I identified more with stress than with what was going on,” she says. Her mom did explain her cancer in an honest way, which Lloyd appreciated. “I do recall feeling the weight of that conversation,” she says. “Yes, it was a hard conversation to have, but honestly to a degree, it is very important. It’s the burden of a parent—not wanting to burden their kids with bad news, but my mom was always honest.”

Lloyd, who now hosts a podcast called Dying of Laughter, which takes a humorous approach to talking about death and grief, says therapy was what helped her cope after her mother’s diagnosis. “When you are a child of a sick parent, it is extraordinarily important to communicate regularly with someone besides your parent about what you are experiencing,” she says. “I attend therapy now as an adult and am really glad I do. Yet I definitely wish I had started therapy as a child—that would have been a game-changer.”