A Survivor’s Story for Breast Cancer Awareness Month: Be Vigilant 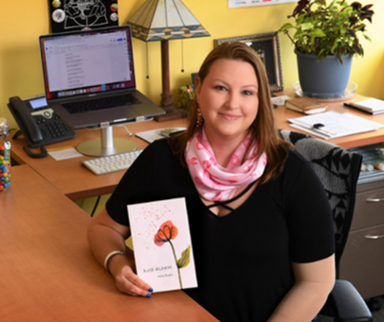 Budris was 15 when her mother, then 54, passed away from cancer, and Budris was just 36 when she was diagnosed with the disease herself. After undergoing a battery of treatments, including chemotherapy, radiation and surgery, Budris is thankful to be cancer-free today but said women far younger than she was, some in their early 20s, can and do develop breast cancer.

Doctors do not typically recommend mammograms until women turn 40, so women must be vigilant about their own health long before then, she said.

Budris said self-examinations and self-awareness with one’s body can help detect abnormalities. If something doesn’t seem right, it is crucial that women advocate strongly on their own behalf until a doctor prescribes testing to rule out disease, she said.

“I felt my tumor doing a self-exam and I was lucky that my doctor took me seriously right away,” she said. “I hear about a lot of women in their 20s or 30s having to go to several doctors to get a proper screening.”

According to the American Cancer Society, one in eight women in the U.S., roughly 13 percent, get breast cancer, and while some disease risks are genetic, experts say women – and men – can improve their odds against it by limiting alcohol consumption, maintaining a healthy weight, exercising regularly and, for women with infants, breast feeding.

A lifelong poet, Budris, who is also program coordinator for the Master of Arts in Writing in the Ric Edelman College of Communication & Creative Arts and editor of the MA program’s literary journal Glassworks, has written extensively about her experiences including a book of poetry, “Mid-Bloom,” in which she explored her feelings about losing her mother and her own cancer journey.

Her Writing Arts colleague Heather Lanier, author of the acclaimed memoir “Raising a Rare Girl,” wrote that Budris addressed losing her mother through her recall of some of the simple, heartfelt, meaningful moments that make up a life.

“(Budris’s) poems examine delightfully surprising specifics, showing the tender bravery required in our courage to keep on,” Lanier wrote in jacket copy for “Mid-Bloom.” (The title refers to losing her mother young, in “mid-bloom.”)

In addition to her book of poetry, Budris has written extensively about her own cancer and treatment through a personal blog and as a guest blogger, including a piece for Penn Medicine titled “Joining the Breast Cancer Club: Katie's Story.”

Budris said expressing one’s feelings is not always easy – nor should it be – but it can be cathartic. In a voice at once honest, empathetic and informative, Budris wrote that she felt almost predestined to get cancer because of her mother’s history with it.

“In some ways, I always knew I would,” the Penn Medicine post begins, moving the reader through her discovery of a small lump, her treatments, setbacks and survival.

Following her treatment, she trained to be an advocate for patients with the Philadelphia-based non-profit Living Beyond Breast Cancer, supporting people across the country who are wrestling with the disease.

“I don’t counsel people to be upbeat,” she said. “I just encourage them to be honest with their experience.”

Ultimately, she said, discovery of a lump in her own breast may have saved her life and she said the best thing women of any age can do is to know their own bodies, to conduct regular self-exams and to act quickly if something doesn’t seem right.

If she hadn’t done the self-exam or “if my tumor didn’t happen to be so close to the surface, I might not be here or I would be living with breast cancer for the rest of my life,” she said.