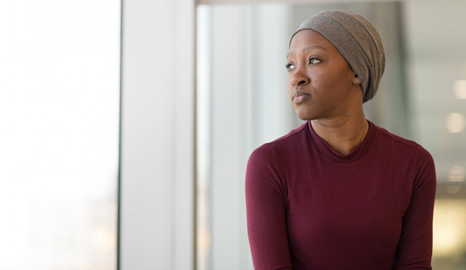 BCRF researchers Drs. Jill Bargonetti and Funmi Olopade collaborated to investigate potential biomarkers and a targeted treatment for this aggressive form of the disease.

Approximately 15 percent of all breast cancers are classified as TNBC, a form of the disease that lacks estrogen and progesterone receptors and HER2 protein. Because TNBC tumors lack these factors, they cannot be treated with hormone therapy or HER2-targeting drugs. TNBC disproportionately affects younger women and those of African or Hispanic descent, and it is the most commonly diagnosed form of breast cancer in BRCA1 mutation carriers. Chemotherapy is standard treatment for TNBC and, in patients with BRCA mutations, targeted drugs called PARP inhibitors are also used.

The importance of mtp53 and PARP1 proteins in TNBC

Over 80 percent of TNBC tumors express a mutated form of p53 (designated mtp53). In its normal form, p53 suppresses tumor development by preventing cells with unrepairable DNA damage from dividing and passing damaged DNA to daughter cells. Contrary to its normal function, mtp53 promotes not only tumor growth, but tumor cell invasion and drug resistance.

“I asked Dr. Olopade if she’d like to collaborate on a study to determine whether the mtp53-PARP association was prevalent in TNBC patients,” Dr. Bargonetti said. “This study came out of those conversations. Our data strongly suggest that mtp53-PARP is a biomarker for responsiveness to anti-PARP therapy.”

The results of the study

Using a variety of laboratory models and methods, the BCRF researchers found that mtp53 interacts with PARP1 proteins to facilitate the DNA repair process, thus promoting the growth of TNBC tumors. This interaction, however, made the cells exquisitely sensitive to the combination of a PARP inhibitor, talazoporib (TALZENNA™) and a DNA damaging drug, temozolomide (TEMODOR ®). These agents appear to act synergistically to lock PARP1 on damaged DNA, thereby preventing further DNA repair.

In addition, the researchers examined clinical tumor samples and found evidence for mtp53 and PARP1 as dual biomarkers to identify patients with TNBC who may respond to treatment with this combination of chemotherapy drugs.

What this means for TNBC patients

These findings expand our understanding of TNBC and may result in better treatment strategies for this aggressive disease. While these studies are in early phases and additional studies are ongoing, both drugs are already FDA approved, which may increase the chance that this combination approach can move into clinical trials quickly.

“This paved the way for an NIH award to explore mtp53-PARP in a much larger cohort of TNBC patients,” Dr. Bargonetti said. “Our BCRF-supported work is gaining wider attention in the field.”