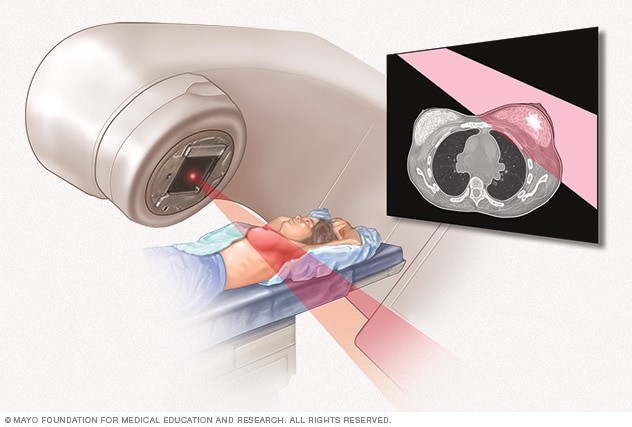 The X-rays or particles are painless and invisible. You are not radioactive after treatment, so it is safe to be around other people, including children.

Radiation therapy for breast cancer may be delivered through:

Radiation therapy kills cancer cells. It's often used after surgery to reduce the risk that the cancer will come back. It can also be used to provide relief from pain and other symptoms of advanced breast cancer.

If you're having an operation to remove the breast cancer and leave the remaining breast tissue intact (lumpectomy or breast-conserving surgery), your doctor may recommend radiation after your procedure to kill any cancer cells that might remain. Adding radiation after a lumpectomy reduces the risk that cancer will return in the affected breast.

Lumpectomy combined with radiation therapy is often referred to as breast conservation therapy. This type of treatment is as effective as having all the breast tissue removed (mastectomy). In special situations where the risk of recurrence is very low, your doctor may also discuss the option of avoiding radiation after a lumpectomy.

Radiation can also be used after mastectomy. In this situation, the radiation can kill any cancer cells that might remain and reduce the risk that the cancer may recur in the remaining tissues of the chest wall or lymph nodes.

When determining whether you should undergo radiation after mastectomy, your doctor considers whether you have:

Radiation therapy can also be used to treat:

If your breast cancer has spread (metastasized) to other parts of your body, radiation therapy may be recommended to shrink the cancer and help control symptoms such as pain.

Side effects from radiation therapy differ significantly depending on the type of treatment and which tissues are treated. Side effects tend to be most significant toward the end of your radiation treatment. After your sessions are complete, it may be several days or weeks before side effects clear up.

Common side effects during treatment may include:

Depending on which tissues are exposed, radiation therapy may cause or increase the risk of:

Rarely, radiation therapy may cause or increase the risk of:

Before your first treatment session, you'll go through a radiation therapy planning session (simulation), in which a radiation oncologist carefully maps your breast area to target the precise location of your treatment. During the simulation:

Before internal radiation therapy (brachytherapy) is started, a special device for placement of the radioactive material is placed in the area where the cancer was removed. This may be done during your cancer surgery or as a separate procedure several days later.

What you can expect

A common treatment schedule (course) historically has included one radiation treatment a day, five days a week (usually Monday through Friday), for five or six weeks. This course is still commonly used in people who require radiation to the lymph nodes.

Increasingly, doctors are recommending shorter treatment schedules (hypofractionated treatment). Whole-breast irradiation can frequently be shortened to one to four weeks. Partial-breast irradiation may be completed in five days or less. These hypofractionated treatment schedules work as well as the longer one and may reduce the risk of some side effects. Your radiation oncologist can help decide the course that is right for you.

Delivery of the radiation may last only a few minutes, but expect to spend 15 to 45 minutes for each session, as it can take several minutes to set you up in the exact same position each day. This step ensures precise radiation therapy delivery.

Radiation therapy is painless. You may feel some discomfort from lying in the required position, but this is generally short-lived.

After the session, you're free to go about your regular activities. Take any self-care steps at home that your doctor or nurse recommends, such as taking care of your skin.

In some situations, once the main radiation therapy sessions have been completed, your doctor may recommend a radiation boost. This commonly means additional fractions of radiation directed at the place of highest concern or four to five additional days of treatment. For example, after whole-breast irradiation is complete, a boost of radiation is commonly given to the area where the cancer was removed.

For internal radiation, the radioactive source is inserted once or twice a day for a few minutes in the implanted radiation delivery device. This is usually done on an outpatient basis and you can leave between sessions.

After the course of treatment, the radiation delivery device is removed. You may be given pain medication before this happens. The area may be sore or tender for several days or weeks as the tissue recovers from the surgery and radiation.

After you complete radiation therapy, your radiation oncologist or other medical professionals will schedule follow-up visits to monitor your progress, look for late side effects and check for signs of cancer recurrence. Make a list of questions you want to ask members of your care team.

After your radiation therapy is completed, tell your medical professional if you experience:

Posted in: In Treatment, Just Diagnosed, Medical/Science, Side Effects, Treatment