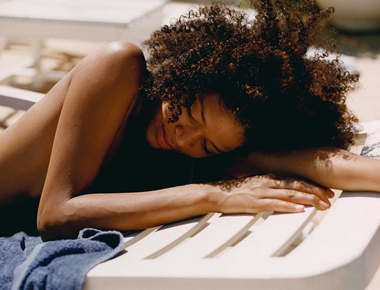 When Your Hair Is Killing You 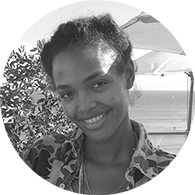 Megan O’Neill is the senior beauty editor at goop. Which is another way of saying she has a passion for clean products, loves anything that reduces stress, and will happily guinea pig herself in the name of wellness.

Like many black women, Donna (her name has been changed), a motivational speaker from North Carolina, has chemically straightened her hair for years. The former professional track-and-field athlete started at fifteen, when she and her best friend were finally allowed to buy an at-home relaxer kit.

“We were excited,” Donna recalls. It was something of a rite of passage into black womanhood, even if it did smell acridly of ammonia. For the next three decades, Donna continued straightening, using popular drugstore-brand relaxers every six weeks. Occasionally, she’d make a trip to the hair salon, where they’d slather her head in mid-strength relaxer. But at fifty-one, Donna, a woman with warm brown eyes and a brilliant smile, abruptly stopped.

“I was getting really bad headaches. I finally put two and two together and realized they were happening after I did the relaxer,” she says. “This didn’t feel right.”

Not only did Donna quit relaxer; she got rid of all potentially toxic conventional hair and personal-care products. The full shift to clean came when, roughly thirty years after the headaches had started, Donna was diagnosed with ovarian cancer: “[At one point,] I had eleven tumors. When you get a diagnosis like that, you do all the research you can. Everything had to change.” Donna, who is still undergoing chemotherapy, became aware of the potentially toxic ingredients in products when she was at Uchee Pines, a holistic retreat in Alabama. Uchee Pines focuses on rehabilitation through exercise, vegetarian nutrition, massage, herbs, and supplements. Donna returned home committed to a clean beauty regimen and a mainly plant-based diet. “I had lost twenty-two pounds,” she says. “I felt great.”

Hair-care products marketed to black women contain higher percentages of endocrine-disrupting chemicals (EDCs) than those marketed to the general public, according to a recent study1 from Silent Spring Institute, a scientific research organization that studies health-disrupting chemicals with a focus on breast cancer prevention. EDCs are associated with cancer, birth defects, and other serious health issues. Hair qualities such as texture—and social norms around what that texture should be—are likely why hair products marketed to black women would have different chemical profiles than those aimed at white women, explains Nneka Leiba, the director of the Environmental Working Group’s Healthy Living Science Program. The Silent Spring study examined eighteen different formulas, including hot-oil treatments, anti-frizz polishes, leave-in conditioners, root stimulators, hair lotions, and at-home relaxers, all of which had been selected based on a 2004 to 2005 survey of popular hair care among women. The scientists tested formulas for the presence of sixty-six different chemicals. They detected forty-five. Seventy-eight percent of the formulas contained parabens, and 84 percent of the EDCs detected weren’t listed in the product ingredients. “Hair relaxers and root stimulators consistently contained higher numbers of endocrine-disrupting chemicals,” says Jessica Helm, an environmental health scientist and the lead author of the Silent Spring study. Shockingly, the two relaxers for kids had the highest levels of several EDCs specifically banned in the European Union. (The EU has banned over 1,300 ingredients in beauty products; the US prohibits only 11.)

“During certain stages of development, like puberty, the body is changing and is particularly susceptible to the effects of chemicals,” Helm continues, “which is why it’s concerning that we found the highest levels of some of these chemicals in products marketed to children.” The professional relaxer Donna was treated with at the salon is classified as a potential endocrine disruptor and categorized as a ten (on a scale of one to ten), the highest hazard level on Skin Deep, the EWG’s online cosmetics database, which has assessed over 70,000 personal-care products for toxicity. (Both the EWG’s Healthy Living app and Silent Spring’s Detox Me app offer astute, researched tips on how to minimize toxic exposure.)

It was impossible not to get serious about going completely clean after writing this story, and while I try a lot of clean, nontoxic products, not all of them work for my hair. These six are my all-time favorites. My routine includes all of them, starting with a once-a-week wash.

“There’s a large natural-hair movement happening,” says Leiba. Indeed, sales of relaxer in the US dropped more than 40 percent between 2008 and 2015, and there was a 27 percent uptick in sales of products for natural hair between 2013 and 2015 (the latter now make up 35 percent of the black hair-care market). “But it shouldn’t be assumed that products for natural styles are pure,” Leiba says. The EWG found these products, too, were laced with ingredients of concern, like parabens and formaldehyde releasers.

“The load of [toxic or potentially toxic] chemicals in hair-care products—specifically parabens, phthalates, and heavy metals—affects the endocrine system,” says Taz Bhatia, MD, an Atlanta-based integrative health expert specializing in women’s health. “Although research continues to be conducted and debated, we are learning that chemical exposure is not about a one-time occurrence but a cumulative load that reaches a tipping point.”

Roughly 25 percent of women diagnosed with ovarian cancer are genetically predisposed to the disease, but the EDCs all around us may significantly contribute to the onset of illness, Bhatia says. We eat EDCs in food (they are present in many pesticides and herbicides), and they saturate our household cleaning products, even our mattresses and sofas (in flame retardants). EDCs are everywhere and, in some cases, difficult to avoid.

“Hair care may be an extra source of exposure contributing to a higher total body burden of these chemicals,” says Helm. The extra toxic load in black hair care might also factor into the health disparities between black women and the rest of the US population—especially since black women spend more money on beauty products than any other demographic group, according to a 2018 Nielsen report2 . Black women suffer disproportionately from hormone-related issues, such as preterm birth, uterine fibroids, obesity, and infertility, and black girls go through puberty and start menstruating earlier than white girls. Scientists from the University of California, San Francisco, and Berkeley conducted a continuing study3 of over 1,200 girls, tracked from 2005 to 2011, and found that by age seven, 23 percent of the black girls in the study had started to develop breasts, compared with 10 percent of the white girls. A study4 in the journal Molecular Carcinogenesis found that EDCs may also promote the growth of ovarian cancer cells. “Black women and children have significantly higher concentrations in their bodies of monoethyl phthalate, an endocrine-disrupting chemical commonly used in fragranced products, as well as two types of parabens, another class of endocrine disruptors, according to a large, representative sample of the US population,” says Tamarra James-Todd, an environmental reproductive epidemiologist at the Harvard T.H. Chan School of Public Health. James-Todd coauthored a study5 published in the Journal of Immigrant and Minority Health in 2011 investigating the potentially deleterious role of EDCs in black hair products. Roughly 49 percent of African Americans studied used products containing chemicals that are hormonally active, including those that are able to mimic estrogen. This is important because breast cancer risk is related to estrogen exposure. In contrast, fewer than 8 percent of Caucasians in the study used these products.

“Almost everything in life has a safe range and an unsafe range…water and sunlight in high quantities can be lethal,” says Alex Kowcz, the chief scientist at the Personal Care Products Council, a national trade association that represents cosmetic and personal-care industry businesses that manufacture, distribute, and supply products marketed in the US. “The ingredients used in black hair-care products go through the same safety-assurance process as other cosmetic and personal-care product ingredients. One of the weaknesses of the Silent Spring study is that it fails to recognize that cosmetic and personal-care product ingredients have a safe level of use.” But a 2012 review of studies6 published in the Journal of Neuroendocrinology shows that endocrine disruptors can have biological activity at very low doses, and that concentrations don’t need to be large to have ill effects. “We have noticed concerning trends in our health—increasing rates of certain cancers, infertility, and earlier onset of puberty in young girls—that mirror many of the findings from lab studies that assess the safety of many of the ingredients in personal-care products,” says Leiba. “But some manufacturers still tout, ‘There’s no proof it has the same effect in humans.’ The longer we wait on the proof they require, the more our health will be affected. We should be asking for proof the ingredients are safe before we are exposed.”

Meanwhile, Donna says she has all the proof she needs. “I’m down from eleven tumors to one, and it’s shrinking,” she says. “I’m on a less-invasive type of chemotherapy. I’m walking almost six miles a day, and my plan is to run either the New York marathon or a half marathon in the next two years. I’m so blessed and thankful that I’m able to encourage other people and let them know that if I can do it, they can do it, too.” She credits her energy and optimism to the power of the mind and to her dramatic lifestyle changes.

“Ten of us were diagnosed at the same time,” she says. “We built a bond; we became friends. I shared what I’d learned about clean products, healthy eating, reducing sugar. I told them to stop putting those chemicals in their bodies. But they all still got their perms every two weeks and kept using regular makeup. Now I’m the only one who is still alive.”