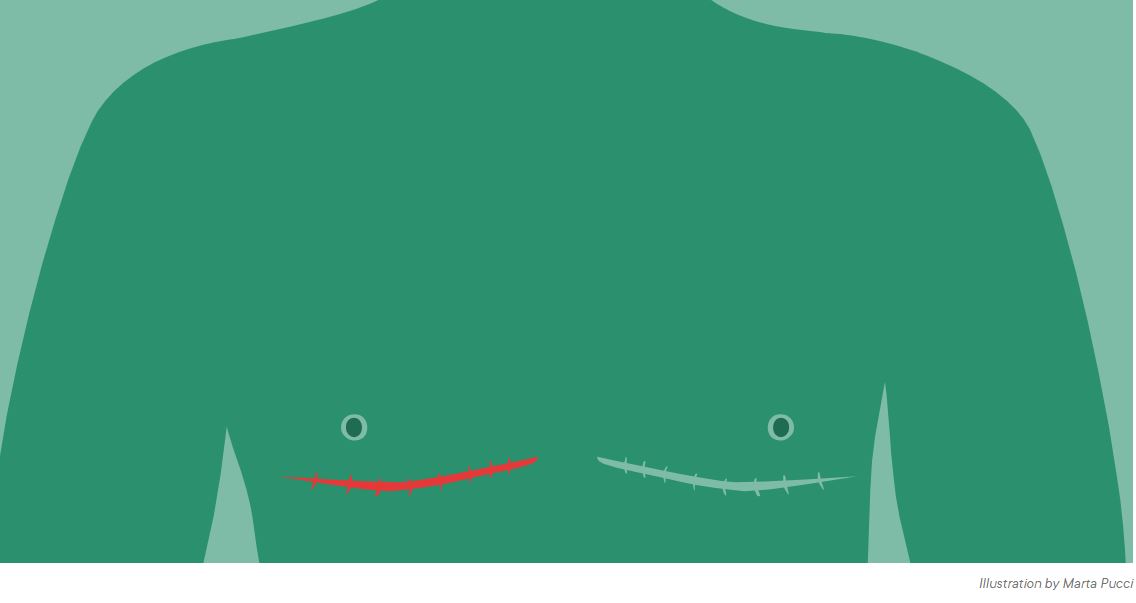 All people (regardless of their sex assigned at birth) have breast tissue and could potentially get breast cancer, but the risk is much higher in people who were AFAB (assigned female at birth). Studies focused on cisgender (non transgender) people have found that, over a lifetime, 1 in 8 women and 1 in 800 men will be diagnosed with breast cancer (1). The risk for breast cancer among trans men and AFAB nonbinary people is not well understood. Those who are not taking testosterone and who have not had any gender-affirming surgeries such as a mastectomy or top surgery (removal of the breasts), or an oophorectomy (removal of the ovaries) have the same risk for developing breast cancer as cisgender women.

Much of what we know about trans men and breast cancer is based on case reports (a detailed report of the diagnosis, treatment, and follow-up of an individual, typically used for rare occurrences). Because these reports are based on individual people, they may not be generalizable to the entire population and don’t allow us to understand the frequency of breast cancer among trans men. Since the early 2000s, fewer than 20 cases of breast cancer in trans men have been reported in the medical literature (2-9). Prior to being diagnosed, almost two thirds had taken testosterone, a quarter had had a mastectomy, and more than a third had done neither.

For transgender men, and AFAB nonbinary or genderqueer people, the risk of breast cancer will likely depend on many factors, such as:

Does testosterone therapy affect the risk of breast cancer?

How testosterone can impact breast tissue

Prolonged exposure to estrogen is believed to be a component of breast cancer development (12). The body can convert testosterone to estrogen in a process called aromatization. There is concern that the converted estrogen could increase the risk for breast cancer (2). Breast tissue also contains receptors for androgens (a group of hormones including testosterone), so abnormal growth (that could turn into cancer) could be stimulated by the testosterone itself (13).

Many trans men and non-binary individuals bind their chests (the practice of compressing breast tissue for the appearance of a flatter chest) to more accurately reflect their gender identity and improve mental and emotional health. While studies have shown that most people who bind will experience at least one negative physical symptom, such as pain, shortness of breath, or skin infections (19,20), no studies have attributed breast cancer to binding.

There is no reason to believe that binding could cause breast cancer.

Do people who have had a mastectomy have a different risk of breast cancer?

The risk of breast cancer in trans men who have had mastectomy or top surgery is not known (21), but is likely lower than those who have not had surgery. In contrast to a mastectomy done to treat someone with breast cancer where the goal is removal of disease, mastectomy performed for the purposes of gender affirmation has appearance and aesthetics as the goal to promote well-being. For trans men who have mastectomies, some of the glandular tissue (the milk producing parts) of the breast may be left behind (22-24), and it's possible that cancer could form in this tissue.

Symptoms and signs to look out for

While seemingly rare, trans men and nonbinary people can still develop breast cancer even after top surgery, and/or while taking testosterone. It’s important to continue to be aware of changes in this part of your body. Some specific things that should be checked by a healthcare provider include:

Routine check-ups and screenings are important for staying healthy. Trans men who have not had a mastectomy, or have only had a breast reduction, may choose (after a discussion with their healthcare provider) to start annual mammograms at 40 years old—the same as the recommendation for cisgender women (21,29,30). Some people may have an increased risk for breast cancer due to genetics or other factors and may need a different frequency or type of screening. Talking to a healthcare provider is a good idea to make sure you are getting the best care for yourself.

How to find a trans-friendly healthcare provider

When you need a check-up or have a concern, finding a healthcare provider who is respectful and informed can sometimes be a challenge. About 30% of transgender people have delayed or avoided seeking needed health care due to perceived discrimination (31), and about 15% of transgender people report that they have been refused care because of their gender identity (32).

If there is a local advocacy organization in your area, they may be able to help with finding a healthcare provider who is trans friendly. Check out our guide to finding a trans friendly OB/GYN for more tips.

Whether you’re on testosterone, have had top surgery, or neither, it’s important to see a healthcare provider if you have concerns about your chest or notice any changes.

If you’re worried about getting a breast check, nervous about going to the doctor, or looking for cancer support groups that are trans-inclusive, here are some organizations that may be able to help:

Center of Excellence for Transgender Health
Educational resources about trans health, and information about support organizations in the USA.

LGBT Consortium
Directory of resources and groups in the UK, that can be filtered by service and region.

Action for Trans Health
A network of grassroots organisations who campaign for trans people's voices to be at the heart of decision making about our own healthcare (UK).

TranzWiki
A comprehensive directory of support groups and organisations that assist trans and gender non-conforming individuals, including those who are non-binary and non-gender, as well as their families, in the UK.

Gender Minorities Aotearoa
Support and information for people living in Aotearoa New Zealand, including a list of trans-friendly healthcare providers.